Landon Ramsay's practice is designed to effectively and efficiently handle the legal issues that you are currently facing. That includes offering free consultations seven days a week.

After graduating from Baylor Law School, Mr. Ramsay joined the McLennan County Criminal District Attorney's Office. The first 18 months of his career were spent prosecuting misdemeanor cases. As a misdemeanor prosecutor, he gained valuable court room experience trying over 25 jury trials. After serving as a misdemeanor court chief, he was promoted to a felony trial court after only 18 months. As a felony prosecutor he handled thousands of cases.

Having seen both effective and ineffective legal representation, he understands the two most important aspects of the attorney-client relationship are honesty and communication. As a client of Mr. Ramsay, you will recieve prompt and honest communication throughout the pendency of your case.

He and his family are active in their local church. As a Christian in the legal field, he believes his duty is not only to zealously defend his clients but to also provide judgment-free representation that focuses on the betterment of each of his clients. 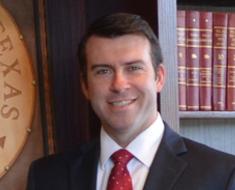 Mr. Ramsay is an experienced and effective advocate with vast experience in the courtroom in both jury trials, revocations, trials before the judge and motions to suppress evidence. With his experience , you're in good hands.